In January 2021, the Masternode- and Stakeholders decide in DFI Proposal #4 to reduce the Collateral for one Masternode to 20000 DFI.

At March 1, 2021, the Hardfork named DAKOTA was implemented in Block 678000 and reduce the Collateral.

Now it is time for the Holders of DFI, to make the network more stable, let decentralization grow and participate in the network with operate a own Masternode.

HowTo to run a Masternode

There are several ways to operate a Masternode in the Defichain Network.

The first possibility is to run the Masternode on a Personal Computer, Laptop or Apple MacBook or something similar in your Home-Network. You can place the hardware, in your office, living room or in your childs room. You can decide what is your favorite.

The only things you need:

[1] You do NOT have to open the Port to participate in staking, but without this open port, you don't help to stabilize the Network and no one can use your node for synchronization or other implemented features

In this scenario you have two Nodes or APP-Wallets in your HOME-Network. One machine act as the Ownernode and held the Collateral of 20.000 DFI. This can be your Macbook, Laptop or Personal Computer. You start this machine, when you need it, only to transfer some Token or use the DEX, LM or send Rewards to another address.

The other machine is your Operatornode. This can be another Laptop or PC or Raspberry or a Home-Server. You only need the actual Nodeversion on it. No Collateral, no Wallet-APP. You can open Port 8555 in your Router to this machine to present Networkservices and make this Node public for other Nodes. Because this Node has no Coins or Tokens, the security risk is much less than in scenario 1.

The preferred scenario is a Hot/Coldwallet solution with the Operatornode "in the Cloud". Your APP-Wallet run at your own machine at home like in option 2. In best case with Ledgersupport as a "Cold-Wallet". This Wallet contains the Collateral of 20.000 DFI and must only active when you want to act with your Wallet or Node.

The Operatornode is hosted in a professional TIER 2 or 3 Datacenter. A simple Virtual private Server is enough, no big Rootserver or something else needed.

I have found a block, but the rewards are not apparent

I set up a masternode in the testnet and after a few hours I already found 2 blocks. But the rewards are not displayed in the wallet. 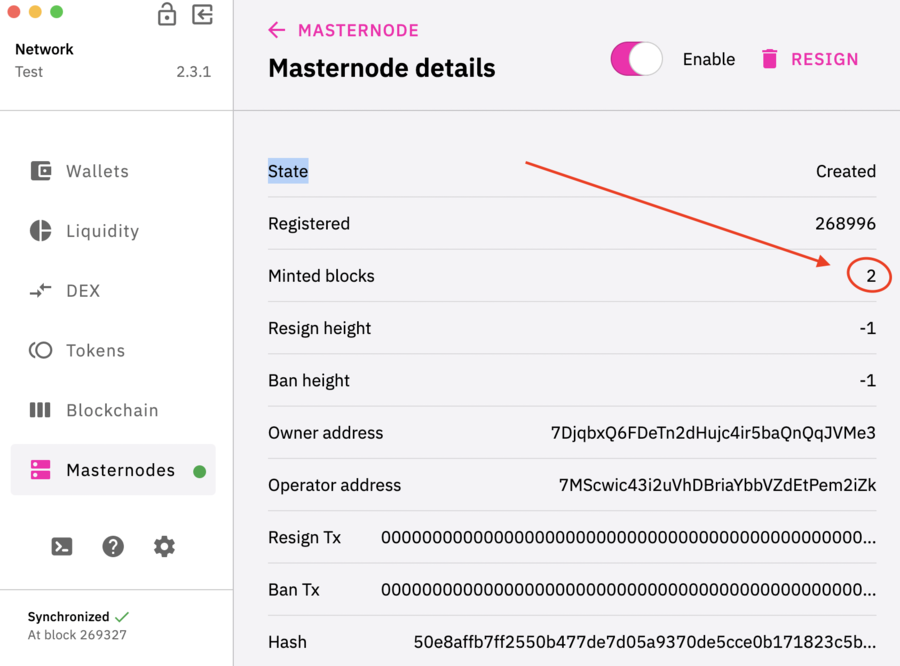 Mining Rewards are displayed correctly in the Explorer. 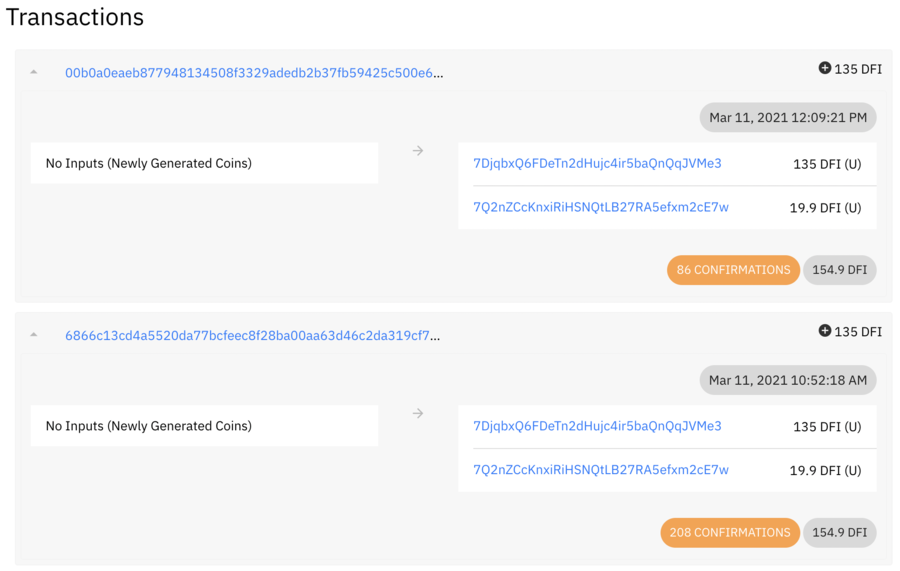 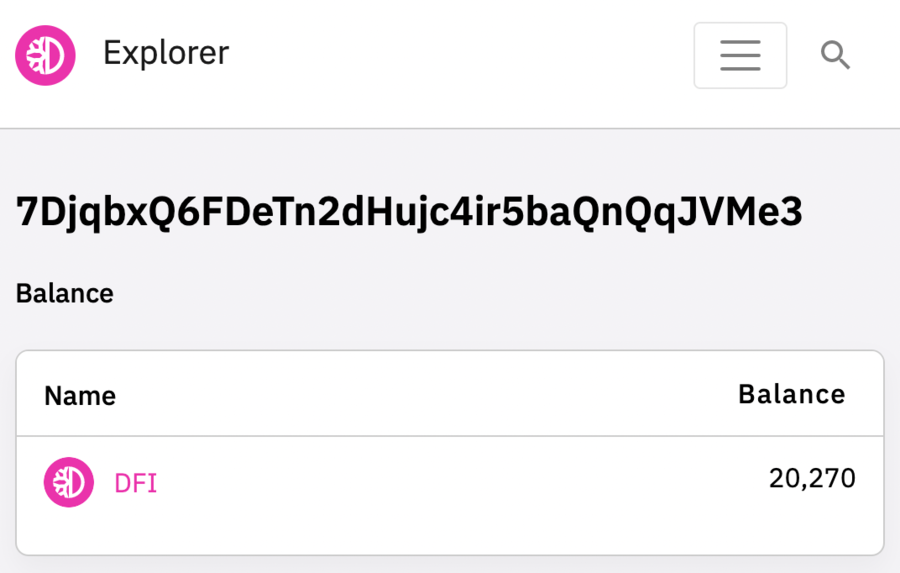 The balance in the Wallet is smaller than the distributed rewards. 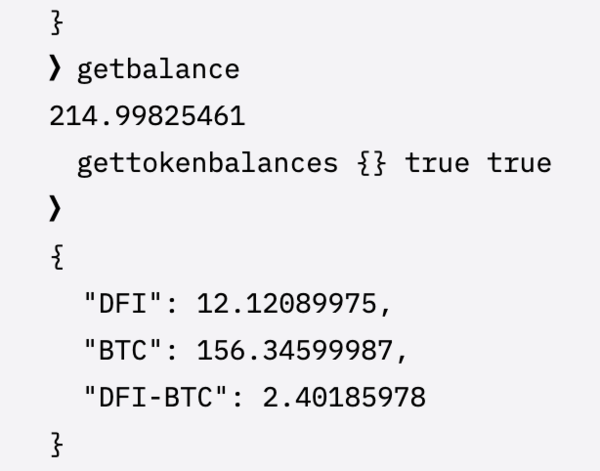 DFI Rewards are only released after a certain block time has elapsed. To see the coins that have not been released yet, you need to enter the following code in the console: getbalances 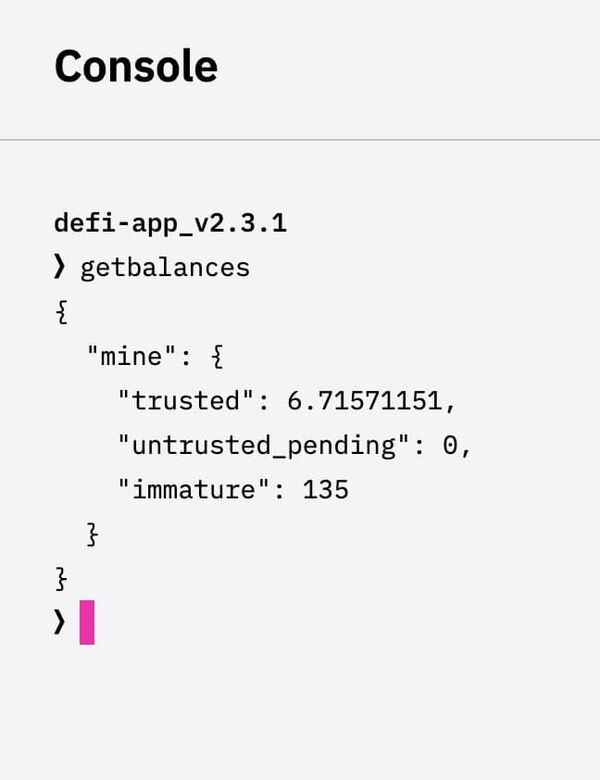 After the expiration of the blocking period, the coins will be displayed correctly in the wallet.